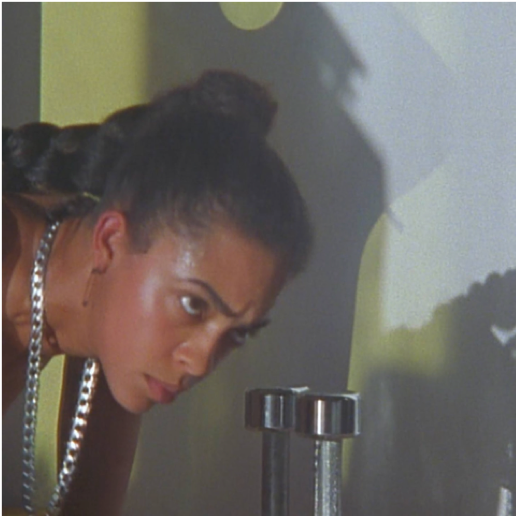 Kelsey Lu debuts her cover of 10cc’s classic “I’m Not in Love” today, alongside an Alima Lee -directed video—listen and watch here.

Of the song Lu says, “This is dedicated to the ones who have ever felt misunderstood in the name of Love, in the name of Self. Who Love the Passion, Love the Grace Of Dramatics, Love the obsession of life and want to Kill the Confusion all while finding beauty in the abstract of growth and humor that surrounds the horrors both within and around us daily.”

“I’m Not in Love” follows “Due West” and “Shades of Blue” released last year to great critical acclaim. Dazed described the singles as “profound reflections on hope, peace, home and the self”. Ahead of the forthcoming release of her debut album this year, Kelsey Lu will be supporting Oneohtrix Point Never at the Roundhouse this March.

Furthermore, Lu graces the cover of V Magazine’s current issue, shot by Inez & Vinoodh and interviewed by Dev Hynes—read the story here and on newsstands now.

A vocalist, cellist and producer, Kelsey Lu’s debut EP, Church, was released in 2016 to critical praise. Born in Charlotte, North Carolina, Kelsey Lu left home at 18 to study cello. Now based in Los Angeles, she has collaborated and shared stages with the likes of Solange, Sampha, Blood Orange, Kelela, Moses Sumney and many more.

“a searing voice that could shatter stained glass.” – The Guardian

“It’s Lu’s voice, emotionally generous and brimming with hairpin melodic turns, that remains her most potent instrument as she looks inward for resilience.”—Pitchfork

“That's the thing about Lu: You can't look away, and you can't stop listening.”—Elle